I cannot resist the opportunity to extend some aloha to the memory of a great writer! 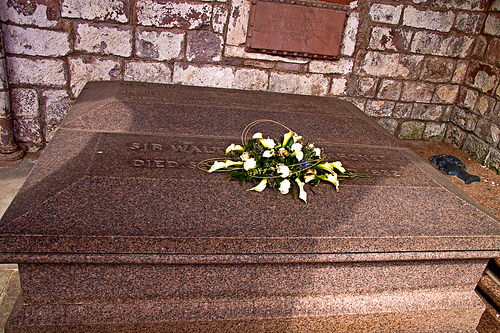 Several years ago, a Scottish, Internet friend, Dave Cleghorn, gave me permission to use his photo that he posted on Flickr.  Thanks, Dave!  But it took me more than six years to actually post it.  Tsk!

This wonderful author was laid to rest at Dryburgh Abbey as the world mourned the loss, and still does.  Britannica.com lists him as the "Scottish novelist, poet, historian, and biographer who is often considered both the inventor and the greatest practitioner of the historical novel."  No arguments here!
Posted by E.L. Hunter at 9:01 PM No comments:

Alright, alright! It was not on my turf but this story still made my bunny hairs stand up! Okay, I know people are busy but when you say you are going to be respectful about things, don't you think you probably should do just that? I am all in support of erosion control but, really? Did you seriously do this crap?


Most people would probably say, "Relax! There are no bodies there; it's just the stones!" Fine, but the whole idea was just nasty. They were supposed to grind up those stones but instead they threw them into a drainage canal whole? There was no regard for, well, no regard for anything!

Note to Exeter District Cemetery: Find another recycler! Mahalo to the Fox station in Idaho for the video.

While this was certainly no fault of the cemetery's you have got to wonder why those stones were being replaced in the first place! Arbitrarily?

Mother's Day was hard this year.  It was the first one after losing Mom.  There were so many people at the Hawaii State Veterans Cemetery in Kaneohe. 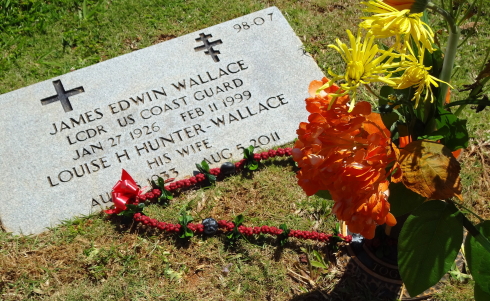 Mom always loved yellow and orange.  I was lucky to find these flowers -- just what I wanted! 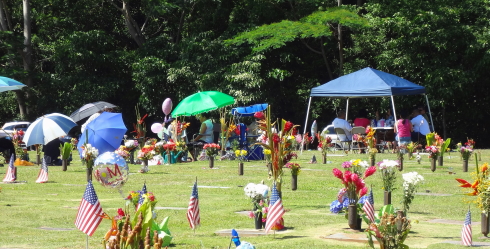 Hawaii Veterans Memorial Cemetery is unique in its own way.  It holds little interest in its presentation but what is the most interesting here, I have found, is the families!  Obviously Mother's Day was a big thing this year.
I was grateful that these families were laughing so loudly -- it helped me not to cry, as much.  I thought of going over to them and thanking them but I figured they would think me crazy so I didn't.  Now I wish I did.  They had the right attitude -- I'm just not "there" yet.
Hawaii has beautiful cemeteries.  Wait until this weekend!  Memorial Day brings flags, flower lei, and people sharing love and memories. 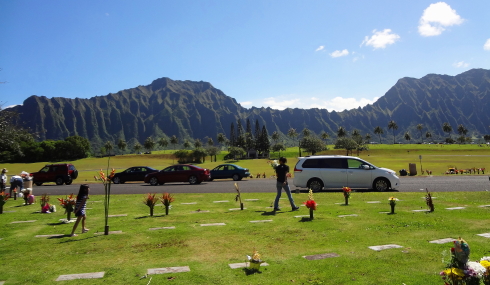 I love my home.  Visit a cemetery this weekend, military or otherwise.  Remember them and celebrate their lives!
Posted by E.L. Hunter at 7:24 AM No comments:

What's In a Gravestone? 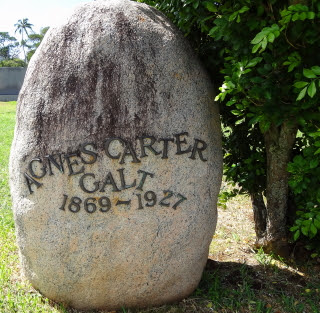 This post over at A Grave Interest made me think about the messages sent to us by gravestones about the people who are buried there.  An epitaph says a lot but sometimes the stone itself tells a story!

This photo to the right is one of my favorites!  I love the stone and I love the letters!  I cannot help but think Ms. Carter Galt must have been a very fun-loving lady!  Seeing this stone make me wish I knew her!

It's a rock. I'm serious -- it's a rock!  I figured you might not believe me so I made sure to include the rear view below. 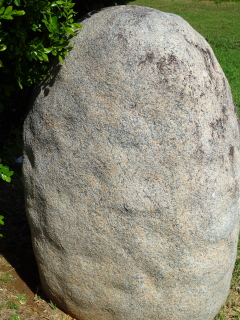 This post was actually started on December 2, 2011 but I owe this family so much more research and text about them.  I will do that in another post but for now, since I fell in love with this stone when I saw it, I just have to share it.

In addition, sharing this photo with everyone is part of my attempt to assist with the kick-start and recovery of the Graveyard Rabbits Carnival, I am including it before I am satisfied with text.  I am very satisfied with my other Carnival participants -- you have GOT to check it out!

There are many more photos to be taken around O'ahu -- and the State if I ever leave my island, but for now my photos are limited compared to those of my graveyard hopping friends.  As of right now, I must admit that this is my favorite photo because there are few, if any, like it.
Posted by E.L. Hunter at 11:02 PM 3 comments:

Gravestones where you least expect them!

On the 4th of July a few years ago, 2007 to be exact, we went fishing with family.  It was a beautiful day and everyone was enjoying the sun, the ocean, and time with each other.  When I got annoyed at my own clumsiness, I turned my attention to other things.  You can find the post about that day here.

If you are on Facebook, here is a link to the fishing story: http://www.homespunhonolulu.com/lets-go-fishing/)

My attention turned to photos of the interesting surroundings.  Here is what I wrote about a very oddly-placed item:


"As luck would have it, and as odd as I am about such things, I get to be the lucky one to spot a gravestone cemented to the reef at right about the high-tide water line."

Keep in mind that this was more than four years before I found some like-minded people and became the Graveyard Rabbit that I am now.

Ellen May McEnroe Miles passed away in May of 1999.  I tried that day in 2007 and I have tried since to look up her name on the Internet but I have found very little about her.  I did find something on one of the ancestor sites but could not find out any real detail about her or her life.

Perhaps she was a family member of the family that lived in the house fronting the beach where we were.  Maybe she loved Hawaii and this was her final wish.  Maybe her ashes were spread here.

The inscription says, "Soaring through the heavens."  Perhaps someone will see this and leave a comment about who she was and/or why her grave marker is here.  It is quite a conversation piece, if you happen to be around at low tide.
Posted by E.L. Hunter at 8:31 PM 5 comments:

What on Earth is a Graveyard Rabbit?

If you look to the right you will see a strange looking rabbit and wonder what that is all about.  Trust me, so did I!  I'm supposed to be a what?  What's a Graveyard Rabbit?  I had to know!  It did not take very much or very long to find out.  Who doesn't love Google at times like this?
The Graveyard Rabbit
by Frank Lebby Stanton
Edmund Clarence Stedman's American Anthology
1787-1900, published in 1900

That anthology actually contains five of Stanton's lyric poems.  I fell in love with this poem as I'm sure the founders of The Association of Graveyard Rabbits must have.  Well, that is until about the 28th line or so -- "To whoever shall sever his furry feet!"  The scary part of that line is that I had a recurring dream when I was a child -- I kept dreaming that I had to wear special skates or my feet would fall off.  Seriously!  I kid you not!  I wonder if that was somehow prophetic.  Hmmm... kind of creepy actually.

At any rate, I don't think I will ever want to look at or touch a rabbit's foot again! But, that is for another conversation.

I love the poem and I love that my new found association adopted it!  I'll adopt it too -- with an ever-so-slight different selection of words.  Getting back to that button on the right, it was lovingly designed by yet another graveyard rabbit, the footnoteMaven.  You might want to Google that name too! 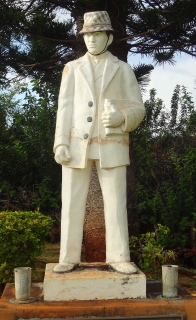 Who is that statue?  Who is José Rizal?  My oh my, what a loaded question that turned out to be!  I should be ashamed of myself for not knowing.  Don't ask me why I think I should feel ashamed, but I do!

In the Phillipines, José is a national hero!  He was a brilliant man who stood up and spoke for his people and against the established regime and other powers trying to manipulate his people.  He earned a degree as a doctor and he also wrote novels.

"Why independence, if the slaves of today will be the tyrants of tomorrow?"  The Reign of Greed

During his travels he actually became conversational in 22 languages!

"He who does not love his own language is worse than an animal and smelly fish."

It is a good thing that I am pretty fond of my language!

I did ask Mililani Cemetery why this statue is there.  They could not answer me about its history.  They could only tell me that it had been there as long as they had been working there.  I did, of course, asked about the hat.  The reply was that people put leis on him all the time so maybe someone was trying to protect the head of the statue.

If they locate the history of the statue, the promised to call me and let me know.  Then I can share it with all of you.


The statue certainly does not do him justice -- he really was a very nice looking man.  Wikipedia had this photo and I was very happy to be able to share a true representation of this very young and brilliant man.

If you read through even a little of his history, you can see why he is a hero with the Filipino people!
﻿﻿
You can follow this link to get a better idea of his biography.  This was the best synopsis of his story that I ran across.  Just let me say that I am very impressed and will visit in his honor when I can and report any new discoveries about the statue's history.
Posted by E.L. Hunter at 12:11 PM No comments:

The Association of Graveyard Rabbits

"A tiny ghost in the gloom and gleam,
Content to dwell where the dead men dream"